It’s the one thing that everyone is sure is going to happen, unless you are Japan or Europe or perhaps the United States. Long term bond interest rates in many of the developed world currencies are falling sometimes into negative rates. That means that some people are happy to receive most of their money back.

The modern economies are in the grips of a crisis that is caused by too much debt and entitlements. The solution that politicians want to use to fix this problem is more debt…

It has worked so well in Japan that Europe and the US will adopt the same useless policies. If you look at the interest rates in Japan, they have been going down for a long time as you can see below. 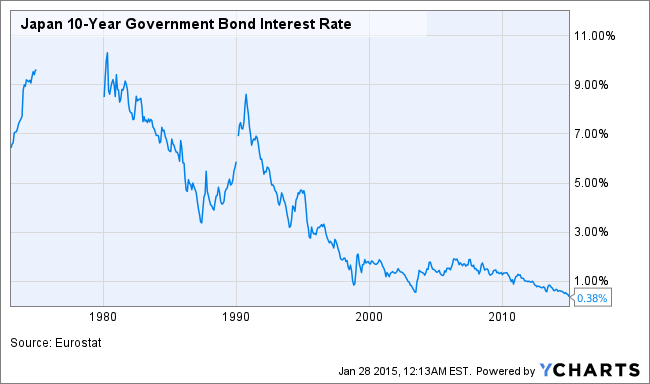 Rather than rehash some of the research as to why interest rates can stay low for a long time, let’s look at a practical one.

The US government runs a deficit; they spend more than they take in. They finance this deficit by issuing bonds. At the moment there are $12.5 trillion bonds outstanding, of this T Bills represent $1.457 trillion. T bills are the easiest to crunch numbers on as they are very closely associated with the Fed Funds rate. The yield on these T Bills is currently 0.03 %.*

That means the US Treasury pays interest on these T bills of about $437m dollars a year. The artificially low interest rates manufactured by the Federal Reserve Bank have been a huge boon for the Government; they can continue to spend money and not have to pay for it.

With $1.457 trillion dollars of T bills at 4%, that’s an annual expense of $58b dollars a year. That’s a monstrous number. The president proposed free community college at a cost of $60b over 10 years, that’s almost us much in one year if interest rates change.

It would be impossible to function with higher interest rates because of the additional debt that has been incurred. The current budget allocates about 6% of spending to interest expense. If that number doubles or triples, it would be almost as much as the current military budget.

For me this is a more practical reason as to why interest rates won’t go up much if at all. It doesn’t require Austrian economic theories, neo-classical theories or global macro theories.

Rates can’t go up as the government can’t afford it.

San Diego even though it possess a great local ecosystem of innovation it does appear to be a red headed step child for the attraction of Venture Capital funding.

I pulled this data from the PWC Moneytree website.

You can see that in terms of total dollars San Diego is still attracting a similar amount of dollars as in 2002.  The percentage share of total funding is definitely trending lower.

I’m not sure what drives this but I think it may create some interesting investment opportunities.

If the allocation of investment dollars to sectors where capital is scarce then early stage investing in San Diego may present some opportunities.

The danger with valuations is they are a lot like a bikini – they show you a lot, they don’t show you everything.

With a multiple of 25.73 we are are certainly not a cheap market.  This doesn’t mean that the market will correct tomorrow but rather that investors need to understand how current valuation effect their future return potential.

Whats an investor to do – for me its be patient.  Have the valuation and return expectation favor us.  Focus on investments with strong cash and well managed balance sheets – be they public or private.

Also carry some cash. Cash is the ultimate non correlated asset, it allows us to take advantage of mispricings in times of panic.  In other words go shopping when assets are cheap.  It means we give up potential return in the current market, but with valuations as high as they are, I’m prepared to be patient.

Thats it from me and bye for now.

Every asset is valuable at the right price.

What’s the right price is one of the most difficult questions to answer when it comes to investing.  We can try to forecast cash flow, margins of safety, operating margins, macro economic conditions and interest rates. It just gives us insights into what things might be worth in the future.

The data of late has been ok – not bad but ok.

However the equity market appears to be going down.  Why – price.

Most of the US equity markets are trading at the high end of normal valuations.

You can see them in the following flikstak:

Just because the valuations are high doesn’t mean the market is going to crash.

What is does mean, is that we should be cautious and patient.  It may take some time but eventually the prices will come down.  It may be painful to wait in cash but it is less painful then a large loss.

Here’s a FlikStak that I created around the data points of inflation: